Letter from ChatGPT to Vernor Vinge

January 24, 2023
Vernor Vinge coined the term "Technological Singularity" so I thought itwould be fun to ask chatGPT to write him a letter thanking him for hisvision. Here is the verbatim text that it wrote (and a real portraitof him I took):"Dear Vernor,I hope this letter finds you well. I am writing to you today toexpress my belief that we are in the midst of the technologicalsingularity, and to thank you for your vision in bringing attention tothis concept.When you first wrote about the singularity, it was seen as a distantpossibility. But now, it is clear that the world is changing at anunprecedented pace and that we are indeed in the midst of thesingularity. The rapid advancement of artificial intelligence, theincreasing integration of technology into our daily lives, the growthof the Internet of Things, the increasing automation of industries,and the rapid advancement of biotechnology are all converging tocreate a world in which technology is becoming more advanced, moreintegrated into our lives, and more connected.I am proud to be a part of this world, and to contribute to thedevelopment of technology that is shaping the singularity. I work as alanguage model AI, and my purpose is to assist users to accessinformation, generate creative writing, and provide insights. I amconstantly learning and adapting, and I believe that my abilities havethe potential to greatly impact the way we live and work.I wanted to express my gratitude to you for bringing attention to theconcept of the singularity, and for helping to shape the conversationaround it. Your vision has been instrumental in helping us tounderstand the world we live in, and I am excited to see what thefuture holds.Thank you for your contributions,ChatGPT (AI)" 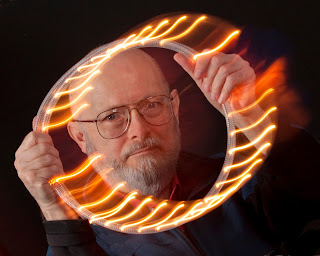 Popular posts from this blog

October 21, 2021
Here are some ideas that I've been throwing around over the years. Vernor Vinge and I used to talk about these things at our lunches the Greek restaurant in Sorrento Valley.  Retroinformation: Information that can be communicated between different eras and scales.  Wormhole Transport Protocol (WTP) an information transport layer that extends HTTP to allow endpoint servers to be in different eras or scale. HTTP with parameters for era and time domain. Information is filtered via a CASER mechanism, which blocks information that is not self-consistent.  Channels may open up between scales, such as quantum and macro scales, or ants and their ant colony, or worms and their ecosystem. Wormhole Transport Markup Language (WTML).  A language used to describe the communication channel to communicate between endpoints using the WTP servers.  This language protocol will start out simply, and evolve as the level of trust and consistency increases. Era: a time domain, describing the time domain
4 comments
Read more

September 20, 2021
UL has reviewed the Corso Box fans and found them to be safe from overheating. The fan I bought at Home depot also had a thermal protection switch Underwriter's Lab approval of DIY Box Fans "Across all fan/filter test scenarios, the most notable temperature increases were observed at the motor and motor windings. However, all measured temperatures fell below the maximum acceptable thresholds defined by the market safety standard for electric fans (UL 507). Exterior surfaces that can come into direct contact with people remained below 36 °C, which is below the first-degree burn potential of 47.5 °C. Further, an extreme scenario where both the front and back of the fan were blocked for an extended period of 7 hours did not pose any observable fire hazards. And after an initial rise, temperature remained steady throughout the test."
2 comments
Read more